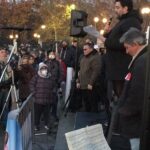 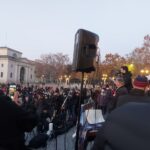 The Greek section of the World Freedom Alliance responded to the call of the Italian organization La Genesi  and attended the event against the medical dictatorship in Sempione Square, Milan, on Saturday, 11/12. The event brought together journalists, activists, doctors and lawyers from all over the world who sent a message of global unity in this struggle.

Our group presented the situation in Greece in the last 2 years and communicated to the world our resistance against this organized global torture and crimes against humanity (watch the speech of our representative in this video at 29’20” or read it in pdf).

Other links from the event and the press conference:

ON THE CONTRARY, THE LOCKDOWN CAUSED

WHAT THE STATE DID ABOUT THE PANDEMIC

The speech of the Greek section of the World Freedom Alliance concluded as follows:

“It’s barbarism. I see it coming in disguise, under illegal alliances and predetermined enslavements. Perhaps it won’t be Hitler’s gas chambers, but a methodical, almost scientific subjugation of man. For his/her complete humiliation. For his/her disgrace.” Elytis

We are the 99%. We are many and that is our strength. We are free by nature, not by law. We will make the world the way we want it to be and we will not ask anyone for permission.

In their Great Reset and the slogan:

“You will have nothing and you will be happy”

we respond with OUR GREAT RESISTANCE:

“THEY WILL CONTROL NO ONE AND THEY WILL BE SAD”