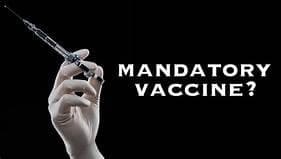 As a doctor and scientist, I am stunned following the public debate that has begun in recent weeks, occasioned by the unprecedented initiative of the Greek government to introduce mandatory vaccination of specific professional groups (EMAK – Special Units for Disasters, and in the near future medical professionals) against COVID19.

In this article, I do not wish to examine the potential constitutionality and legal status of such a decision; there are competent lawyers in this country who can analyze this issue better than I can. I will not even comment on the fact that such an initiative on the part of the Greek government places it among the minority of governments in the world that have attempted such innovation, particularly when it comes to states and societies that respect human rights and public health.

Having spent a proportion of my medical career in university institutions and German medical schools, I learned to elaborate any medical decision on the basis of the current published scientific data, without being influenced by my personal experiences or other inputs from my social surroundings. As regards COVID19, I summarize below the current scientific data, simplified, without numbers and statistical terms, in order to be understood by non-physicians also:

• So far, as regards the existing vaccines against COVID19, there is only short-term data (for a few months) on disease protection, tolerance and safety(1). Up until now the recorded side effects, especially those of the type of immunity (thrombosis, myocarditis, etc.) raise questions within the scientific community (they indicate that the specific spike is a pathogenic part of the corona virus, with immune action in the human body, and is an exception to most vaccines that use non-pathogenic parts of microorganisms).

• Obviously there is a complete lack of long-term data regarding the safety of the provided vaccines, which is a logical consequence of the haste with which these vaccines were licensed, due to the global health crisis caused by COVID19. Let’s not forget that this is a special emergency license from both the US FDA and the European EMA, in accordance with which, neither the pharmaceutical companies nor the licensing bodies assume any responsibility in regard to possible future complications.(2,3)

•The existing vaccines do not prevent a fully vaccinated person from becoming a carrier of the virus, nor from transmitting the virus. They simply reduce by some statistical percentage the probability of transmission. So whether and to what extent herd immunity can be achieved is something that is now the object of scientific controversy with nothing about it being certain.

On the basis of current scientific data, the argumentation in favour of the mandatory vaccination of any of our fellow human beings is incomprehensible to me. I agree with the consistent scientific position of doctors (mainly from abroad) on the necessity for comprehensive information of the patient by the health professional and free choice of the patient for anything concerning his health. To make my reasoning easier to understand I will continue to dismantle the arguments in favour of compulsory vaccination heard lately by journalists and – much worse – by fellow doctors:

• “Covid Vaccines are completely safe, approved by the FDA and EMA and there is no reason not to vaccinate oneself against the potentially deadly COVID 19. As regards the likelihood of future side effects, this is something that on the basis of the data so far seems unlikely to me, verging on conspiracy theory.”

Unfortunately the above statement, perhaps to some extent paraphrased, was made publicly by a doctor, a professor at a Greek university. As I mentioned above, vaccines are not completely safe, as the security data for them is only short-term(1). The license by the auditing bodies was issued as an exception to the current rules, due to the health crisis and without any liability on their part for possible side effects.(2,3). The concluding formulation, that something ” which seems unlikely to me” is “verging on conspiracy theory” is an expression of arbitrary arrogance entirely lacking in scientific grounding. Especially when, for the current vaccines, are already published scientific researches of possible half-long term side effects (4, 5).

Medical professors at foreign universities have submitted reports to the EMA describing specific pathophysiological mechanisms according to which existing vaccines can have dramatic future side effects. The EMA has officially responded that the pathophysiological mechanism of side effects is theoretically valid, but is currently not confirmed by vaccination data. However it cannot be ruled out theoretically that it may cause side effects in the future(6). Particularly interesting is a letter from the director of the English audit firm Evidence-based Medicine Consultancy Ltd, to the Medicines and Healthcare Products Regulatory Agency, which was leaked to the English press regarding the statistical processing of reported possible side effects that occurred in vaccinated populations in England and reported through the yellow card system (7). The letter concludes proposing the imterruption of vaccinations until the possible causal link between the reported side effects and the vaccines against COVID-19 is scientifically clarified. The response of the official English health authorities is not yet known. Arbitrary conjectures without scientific documentation, derived from the personal ego of a medical practitioner, are as conspiratorial as the possibility of implanting microchips through vaccines…

• “The vaccination of specific professional groups such as the employees of EMAK (Special Units for Disasters )and health professionals, should be mandatory because the possibility of their contracting COVID19 is greater than for others, but also because this accords protection to the vulnerable groups with whom these professionals come into contact.”

• “Universal vaccination is an act of solidarity as it accelerates the achievement of herd immunity and victory over COVID19, making possible a return to normality. And given that not everyone wants to be vaccinated, for the common good, vaccination should be mandatory.”

The above argument takes the possibility of achieving herd immunity as a certainty. But as I mentioned above it is a matter of controversy within the scientific community. Numerous physicians and scientists argue that since the existing vaccines do not protect against the transmission of the virus, the so-called wall of immunity cannot be constructed even through universal vaccination. Others claim that, as with other seasonal viruses, which tend to mutate, establishing herd immunity is not any more possible than it is with seasonal flu. There is a number of publications describing that mass vaccination at times of a viral epidemic, to achieve herd immunity, acts in itself as an evolutionary strain on certain viruses, influencing virus evolution by encouraging the production of new strains ”escape” mutations, which can “escape” from herd immunity and spread more easily (10, 11, 12). As has been repeatedly emphasized in this article, which theoretical claim will finally be true remains to be proven by scientific means. Until then the adoption of one or the other point of view as certainty is to say the least unscientific.

Also, more attention is required in analysis of the last sentence on “compulsory vaccination for the common good”. This phrase opens Pandora’s box when it comes to medical ethics. Even if we accept that the achievement of herd immunity through vaccinations is possible and so oblige the whole population to be vaccinated, in the name of the common good, this means that we force a population to be vaccinated against a disease that, for example for those <40 years old, has an extremely low probability of serious illness or mortality, in order to protect those > 65 with concomitant diseases who are more likely to suffer severe illness or death. Something that of course we can achieve just by vaccinating those > 65 or with concomitant diseases. We do not give proper consideration to the possibility of long-term side effects of vaccines. As I mentioned above, it is not zero. Nor is it very low. It is unknown. We are walking in uncharted waters in this case, and at least with the existing bioethical principles no serious scientific or political authority would argue thoughtlessly in favor of a compulsory vaccination with unknown future side effects. Are the politicians, journalists and doctors in our country who dare such absurdity, confronting the health implications, not to mention the potential for civil liability, of their choice?

In conclusion, I intend through this article, using pure scientific data, to indicate why any discussion on compulsory vaccination against COVID19 using existing vaccines is currently scientifically completely ungrounded and bioethically reprehensible. This article is not in any way an anti-vaccine (or, repeating the popular government expression) propaganda of “the sprayed”. I call upon any colleague who would like to challenge any of my claims by scientific means (each claim is based on a corresponding published scientific bibliography, accessible to everyone through scientific study platforms such as pubmed) to do so.

As a clinician, I continue to recommend the COVID19 vaccine to my patients, depending on their age and the presence or absence of concomitant diseases. I inform them comprehensively of the benefits, the rare short-term side effects but also the unknown possibility and nature of potential long-term side effects. Reacting against the one-sided coverage by the media of the weak arguments in favour of the mandatory mass vaccination, I try to provide an outlet for scientific controversy, respecting human rights and public health.

The author of the article is a Doctor, the details of which are available to WFA, but are not published for obvious reasons of targeting.