The Tusenmannamarschen in Stockholm – A 4:0 victory for democracy!

Sweden’s special way of dribbling through the pandemic without masking and lockdown is no longer tolerated on the global playing field, it seems. Without an increase in deaths, the measures are continuously tightened. Compared to Germany it still feels as if you have landed on another planet because almost all cafes, restaurants, sports facilities and shops are open and few masks are worn, but for many Swedes even this situation is unbearable, especially the threat of an approaching mandatory vaccine pass.  They are calling for a democratic dialogue and transparency about the pandemic. I am impressed how low their bar is in accepting the restrictions of their constitution.

On the “Golden Bridge” in Stockholm, Gunnar stops his bike next to me and laughs: “Like the 4:0 win against Germany!” The best friend of my Airbnb-landlord in his mid-70s means in all seriousness that every German immediately knows what he is talking about: The unforgettable World Cup qualifier in 2012, when the German national team lost their four-goal advantage against Sweden and the game ended 4:4.

However, a historic event with far greater consequences will take place today, March 6, 2021 in Stockholm and this time it will not end in a draw:

The Tusenmannamarschen (One thousand man march) for freedom and truth could go down in history as the unforgettable victory of the Swedish people for democracy. The German Foreign Minister Maas would have been delighted to praise the Swedes for their defense of democracy as well as he does about the courageous Belarusian women. But these images from Stockholm unfortunately will never reach him. Once again, the media are not playing fair.

The Swedes scored the 1:0 goal on Medborgarplatsen, the starting point of the march, because the platform truck, which had been converted into a stage, could not be stormed by the police. The demonstrators lined up closely around and hooked tightly into one another.

Since the pandemic law was passed in January 2021, no more than 8 people have been allowed to gather in Sweden for a demonstration. Filip Sjöstöm, a thirty-year-old Swede with red-brown curls, has therefore agreed to appear publicly as the organizer of the march. That alone is a sensation, because the Swede is considered conflict-averse and standing out from the crowd, let alone demonstrating, is not Sweden’s style. But behind him is a great team, together they decided to take this step.

Filip Sjöström had already contacted the police three weeks earlier and asked for a coordination meeting to inform them that the demonstration would take place. He makes no secret of the fact that he and his team are mobilizing with flyers and posters both on social media and in the city. The threat of a fine of 2000 euros and the expected shit storm, including job loss, does not stop him from carrying out his plan: It has to be done, someone has to show his head, defend freedom, bring the truth to light!

The Manifestation for Freedom and Truth, as the organizers call it, has been announced for 2 p.m., many people are already waiting in the square, but most of them arrive shortly before, not to risk the police breaking up prematurely. The police have already blocked off all access roads to the square.

Sjöström drives up in the flatbed truck, accelerates and steers through a narrow gap behind a police van that is not parked close enough to a pillar. The rest of the organization team and many friends are already waiting and ready to lend a hand. In no time metal fences are set up around the truck, the loudspeakers built on the loading area, a huge, golden yellow banner with black inscription: “For freedom and truth” is rolled out. During the setup, another member of the organization team takes care of the entertainment of the crowd. Samuel Andreasson, a black athlete with plaited pigtails, calls out through his megaphone to come closer. All the demonstrators pour in and laugh heartily when Margot, an elderly lady with a walker, announces through the megapon that she has four prosthesises, but the police will not wrestle her to the ground. In the resistance movement she is something of a local heroine, for months she has been on the Odenplan Square in Stockholm every weekend, demonstrating against the corona pandemic.

Together with Andreasson she sings the national anthem cheek to cheek. A touching moment, the contrast couldn’t be more beautiful! And above all: Fuck distance! Fuck the Nazi labeling!

Before the police understand what is happening, the rally is in full swing. From the stage, signs are repeatedly given to the demonstrators where to move in order to fend off the police. It is fascinating to see how everyone immediately understands, a large unit forms around the stage, with its back to the police.  The speeches by Filip Sjöstrom, Dan Gheorghita and Maneka Helleberg, the chairman of the World Freedom Alliance and co-organizer of the demonstration, and the star guest Heiko Schöning, who traveled from Germany as Vice President of the World Freedom Alliance, cannot be interrupted. A magical power emanates from these people on stage, a strong image for love and determination that says: We have the right to stand here, to express our opinion and to protest! We have the power, we are the people! We stand here for our human rights, for freedom, truth and peace!

The police keep forming squads and trying to get through the crowd to the stage. They grab and pull at people and push them out of the way. Some fall to the ground and are roughly dragged away.  Some are arrested. But the stage has become an impregnable fortress, protected by the people. In the meantime it has grown to almost a Twothousandmanmarch, people fill the whole square. Unimpressed by the announcements from the police that the gathering has been dissolved, Filip Sjöström starts the song “Stad i Ljus” by Tommy Körberg, with the English title “Unchained light”. His singing fills the whole square, people sing along and wave their arms. 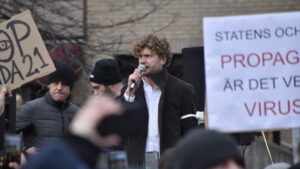 Then, while the stage is being dismantled, the demonstrators line up behind the banner “For Freedom and Truth” to carry it through the city to a square near the Royal Palace. From the “Fellow Citizens Square” the path should lead over the “Golden Bridge” to the “King’s Garden”. More symbolic power is hardly possible and that was also not chosen by chance. As a precautionary measure, the police blocked the road in advance of the route to be taken. They are left ignored and have to watch as the demonstrators change their course and climb the narrow stairs towards the parallel street. 2:0 for democracy! The Tusenmannamarschen is on its way and the atmosphere is bombastic!

On the “Golden Bridge”, which offers a fantastic view onto the city panorama, several transverse police vans block the lane. In front of it, the neon yellow vests of the policemen shine, formed into a wall, behind the police vans a mounted police squadron is waiting. What at first clearly looks like a point win for the pandemic, miraculously turns into a 3:0 for democracy!

The traffic is completely shut down. An organizer goes to the police to mediate so that everything goes peacefully. He is arrested immediately. The crowd stays on the ball and insistently shouts “Freedom for Sweden, we have had enough!” The police use batons and tear gas. Peacefully but firmly, the demonstrators hold the banner in front of them like a protective shield and wait for the free kick. The police finally give in and let the crowd run through the bottleneck of their barrier. Roses are held out to the police, they ignore this gesture or turn away.

The Tusenmannamarschen passes the Royal Castle and reaches its destination. The crowd celebrates the 4:0 with a brilliant speech at the base of the king’s statue. With a raised fist, Max Winter, a further member of the organizational team, fires his closing remarks: “Fear is the real virus! If you allow it, it will steal your freedom!” 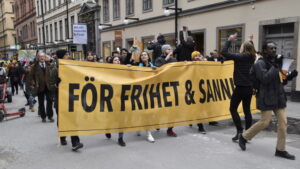 Then comes the final whistle, which declares the demonstration over. However, the announcement does not come from the police, but from the organizers. The cops are already standing by and prove what bad losers they are. As if the day should not end peacefully and a quota for supervisors fulfilled, they lead harmless people away like felons.

I am going home happy, knowing that this victory is only the beginning of a great democracy movement in Sweden. I have hope again. There are courageous people who show moral courage and who despite their Viking image fight peacefully for a better world – for all of us and for future generations. Thank you Sweden. I’m a fan!

We use cookies on our website to give you the most relevant experience by remembering your preferences and repeat visits. By clicking “Accept”, you consent to the use of ALL the cookies.
Cookie settingsACCEPT
Manage consent

This website uses cookies to improve your experience while you navigate through the website. Out of these, the cookies that are categorized as necessary are stored on your browser as they are essential for the working of basic functionalities of the website. We also use third-party cookies that help us analyze and understand how you use this website. These cookies will be stored in your browser only with your consent. You also have the option to opt-out of these cookies. But opting out of some of these cookies may affect your browsing experience.
Necessary Always Enabled

Any cookies that may not be particularly necessary for the website to function and is used specifically to collect user personal data via analytics, ads, other embedded contents are termed as non-necessary cookies. It is mandatory to procure user consent prior to running these cookies on your website.